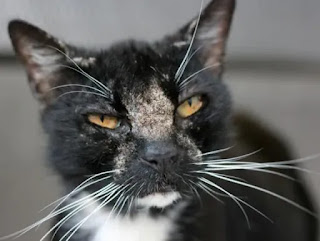 Not everyone wants to be saved from their current life-style. Some could be quite well adjusted to living in a manner that others may think is not ideal for their best physical or (heaven help us) mental health. Hoarders, for instance. Feral cats for another instance.

This is not a portrait of the cat that has recently been moved into my neighbourhood. He is reluctant to pose for a portrait during his very frequent visits to my garden, despite the fact that he's spending so much time here. He glowers through the windows at me as he scampers past on his way to the killing fields at the bottom of the garden. If he had fingers I'm sure he would raise a couple of them in my direction. However, I think the portrait sort-of sums him up, a shifty-looking loner. I hope I'm not being too hard in my judgements, but if I am it's because I have good reason.

He's a townie, a street-wise city cat; a thieving, murderous cat.  Or at least he was until he was rescued by a well-intentioned neighbour. He's oldish, sexually active, an enthusiastic hunter, a fighter and has probably been fed by numerous other well-intentioned people in the city centre, such as those very kind ladies (usually) from the Cats' Protection League. Or he's a skilled scavenger. Or possibly he knows about cat-flaps and how to get through them when they are left unattended. Or all of these in combination. But he's survived independently, lived a busy life, may well have numerous children of all sorts of sizes and ages.

But now he's been brought to live here, alongside many other cats who have their own devoted owners and their own cat-flaps which open and close in conjunction with their own microchipped shoulders. Not much chance of a nifty raid on someone else's supper dish. Not even much chance of a dustbin raid during the night. Everyone has those massive wheelie-bins, and if a cat falls into one of those he won't get out again. I expect he knows that. Even less chance of a quickie with a local girl. The local girls have their flaps locked in the early evenings. They stay at home, watching television programmes about wild-life, or just sleeping comfortably on  a cushion or a lap while being stroked. Not even the chance of a fight. The local boys don't go out after dark either. They have all met with the local Vet.

During the day he can run across the road, causing vehicles to swerve, and go hunting in a garden full  of dear little fluttering birds. Some of them can hardly fly and are just a mouthful. There are all sorts of birds that he won't have met in the town-centre. There are great hiding places, and easy pickings. The only problem is that he now knows there's a rather fearsome white-haired old lady who's recently spent about £40 on bird-food and who is very much against the continuation of massacre.

What he doesn't know, and what the white-haired old lady knows is that he has an appointment with the Vet coming up soon.

P.S: He's had his treatment from the Vet and is recovering in his new home. It seems that he's realised his new home could have benefits, because he hasn't been seen in my garden since Operation Day. My neighbour says he (the cat) is completely different. The birds and I wait and see.

Posted by Relatively Retiring at 11:58

Ha ha indeed. I bet that will cramp his style!

Better late than never, lol. And I imagine he will never grace your garden again!

Reminds me of Cohen the Barbarian.

The world has changed around him, and he doesn't fit in anymore, and can't change. I love your description of him, though. Punk Cat.

He does look like a bruiser who has lived a hard life. I hope that he realises that the trip to the vet is for his good (and the good of rather a lot of others as well).

Joan: Perhaps I should have sounded more kind. He will be welcome to visit my garden for sunbathing - just not for hunting, killing and using as a lavatory.

Zhoen: Cohen the Barbarian is just right! Trouble is, I have the feeling that he probably fitted into his previous life-style quite well and has been removed from it without consent. At the moment he is determined not to be restrained within a house. He may feel differently next week.

E.C. I don't think he'll appreciate the Vet's interference at all, but I agree that the bird population may feel safer...and probably the local resident cats as well.


Your ambition is admirable but, if he won't allow photographs, do you think he will allow you to catch him for that vet appointment? (I shudder to think what those sharp, feral claws could do to that formidable white-haired old lady.)

Molly: Thank you for your concern but it wasn't my problem to catch him, and I'm pleased to report that he's now recovering from surgery behind closed doors in his new home. The doors will have to be opened again at some point though............

RR we would love to call for a cuppa en route! If you comment with your contact details I can put them in my address book and not publish the comment.xx
Hopefully it will be longer than with Pete....our bus was late through Palmerston and our good half an hour stop for a cuppa was reduced to ten minutes!!

He sounds like one of those infuriating old men who argue with everyone, smoke too much and roar precariously off on a motorbike from time to time to annoy their relatives. I predict he will be back.