In My Small Corner

'Isabelle' has just taken a short tour around her neighbourhood, and I enjoyed it - so here is mine! 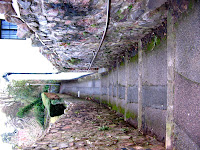 There are so many regional names for alleyways like this - alleys, snickets, gangways? Then there are different names for them when they are between buildings. What ever they are called, where I live they either go down.... 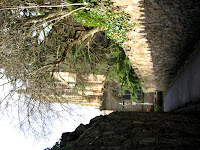 ...or up. This one goes up to the churchyard, and is lit by gas-lamps. Other lamp-posts are useful for supporting notices forbidding the drinking of alcohol, the feeding of pigeons and the allowing of one's dog to relieve itself. And rightly so in a venerable town like this! 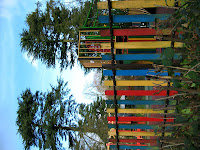 The playground is empty on a cold Monday morning. By evening the youngsters banned from drinking alcohol in the churchyard will be at it here.... 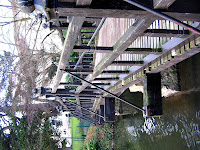 ....and probably tossing the empties in here. In the day time toddlers feed ducks and a kingfisher darts about, regardless of the passing humans (who rarely seem to notice it) and the bobbing lager cans. 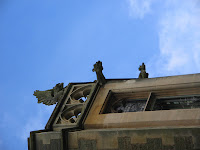 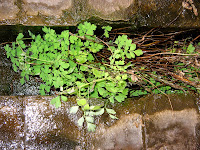 Underneath another bridge, nearer home, a variety of small ferns enjoy life in the dribbles of rainwater. 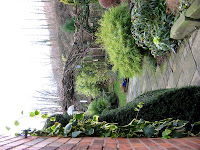 Back to the garden. There are snowdrops, daffodil spears, hellebores and some wonderfully noisy birds. The sap is rising!
Posted by Relatively Retiring at 18:39 9 comments: 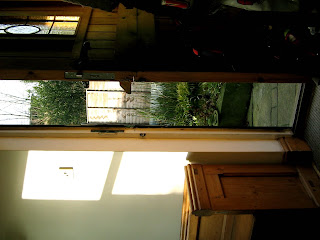 The door is open again. Well, perhaps ajar rather than open, but enough. Enough to see that there is still a foothold out there in the world of work.
'Zhoen' whose wonderfully diverse blog appears most days, has just commented on my 'Nom de Blog'. The retiring is indeed relative at several levels.

I first retired from the day-job when I was 66, then went back to work again at the age of 67. I retired again when I was 68 and now I've been given the chance to return to a small amount of work at the age of 69.
I am aware of shades of Emily Pankhurst, crying, 'Votes for Women'. I feel a distinct call to respond to 'Work for the Oldies', because with the work-role comes a great deal more in the way of identity than I had ever appreciated when I was slogging along full-time.

In a diverse society, where ethnic variations, sexual preferences and religious observances have to be regarded so carefully it is sometimes the Oldies who have to absorb the intolerances.
As my hair went (quite quickly and quite early) pure white I became invisible in places like theatre bars, garages and shops selling anything with the word 'digital' attached. Young, apparently 15 years old, male assistants in computer shops approached me with caution and with a special sort of smile.
Shopping around in working hours identifies the retired. Apparently sensible sales staff assumed I would not be able to insert my debit card into their little machines, and if I could do that I would probably have forgotten my PIN number. I am offered help in putting three small items into a bag. 'Can you manage?' has become a key question, kindly meant, caringly spoken - but uncomfortable all the same.
Sometimes there are very specific problems with my white-haired invisibility. I have been forced off pavements by groups of animatedly-talking young men who simply did not see me. I have been elbowed aside in shops by men in a hurry, and what happens in bars is much more specific. No one means to be rude. It's just that white-haired old women on their own are of little consequence.

So now I'm going back for a while, to a situation where it is assumed, not only that I can manage, but that I will meet targets and tick boxes and fulfill expectations, just as I have been able to throughout my working life. No one will ask me if I can manage. They know they'll get a clip round the ear if they do!
I am the same person. It is the role that changes, and the perceptions with it.

The Art of Boredom. 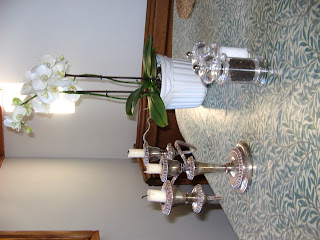 The candles have burned down, the table is bare. Beloved visitors have left. The dog snores loudly, and the fine ash falls gently in the grate. Silence and ice are just outside the door, tapping on the window, fingering their way in through the keyhole.
Winter holds the garden in a tight, white grip; darkness comes early and leaves late. It is too cold to garden, too cold to walk with any sense of enjoyment. The washing up is done, the excess food is in the freezer. Now is the time for the fine art of boredom, a repetition of small events; feeding the stove, feeding the birds and the dog, feeding my mind. Above all - feeding my mind.

A close friend has just had eye-surgery and is unable to read. She never watches television, and her situation (she's a nun) means that she does not usually have access to radio or recorded music.
We had a long and paradoxically animated discussion about boredom. I think we concluded that it was both other people, and the lack of other people. A lack of the right people, and too much of the other kind. Then we had to decide which were the other kind. We laughed so much at our descriptions of boring people that we had to stop, as it was not good for her, post-surgically.

The more we thought about boredom, the better it became. Eventually the attempts at describing the state became impossible. Boring meetings become entertaining in the telling, and even just in the mental recall. Boring people become endearing, boring situations are laced with possibility. 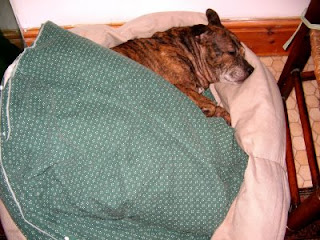 So what is boredom? Perhaps the dog, today, demonstrates its finer qualities (incidentally, she wraps herself in that duvet, sometimes completely). Perhaps it is the skill of mental disengagement, a freedom to wander along the paths of semi-consciousness while engaged in repetitious tasks - or engaged in nothing at all?