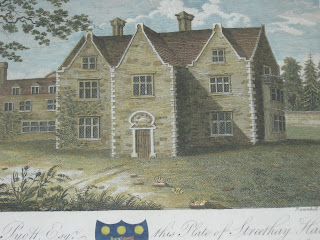 I lived here, long ago.

A little while ago Molly issued a challenge. I couldn't respond to it at the time, but now perhaps I can see and feel my way into the murky past - something I am usually reluctant to do.

I am from confused memories of air-raid sirens and droning aircraft and a fear of fire in the night. From  a time when there were unfenced pits and ponds and crumbling, glass-sharded buildings to trap the unwary explorer. From a time when knees were scabbed by tree-climbing but hair was constrained into plaits, doubly secured with rubber bands and hair-ribbons.
A place and time where things were rationed, and there were coupons, and clothes were handed down from cousins who were older and larger and very differently shaped.
From a time when food was valuable and had to be eaten no matter how much it was hated, and where there were little children starving in far off countries who could be saved by the scraps I refused to eat, so that the guilt was compounded.
From a time when the long-anticipated taste of chocolate was found to be actually pretty disgusting (until the sweet tooth grew).
A time when so much was scarce that inventiveness was rife.

I am from a joyful, illogical time when ten-year old girls could roam wild and free on battered bikes, only having to return home as it grew dark, but then be caned at school for a failure to learn the nine-times table.
An incomprehensible world of limitless freedoms and savage restrictions.

I am from the magical world of the written word, and the endlessly captivating charms of the spoken word on the radio. A time when the images and visions were all my own, and there was mystery around every corner.

Then, a bit later, I came from a world of deep segregation, boy from girl, clever from not clever, child from adult; a place where our separate worlds seldom collided until, at the age of eighteen, there emerged fully-formed, middle-aged adults from the scarred chrysalis of childhood.

Posted by Relatively Retiring at 10:56 22 comments:

More Signs of the Times 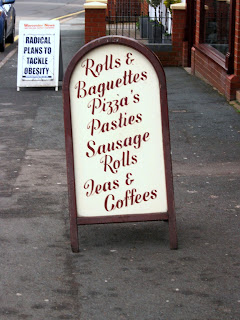 (Nearly) always something to raise a smile on my morning walk!
Posted by Relatively Retiring at 11:41 11 comments: