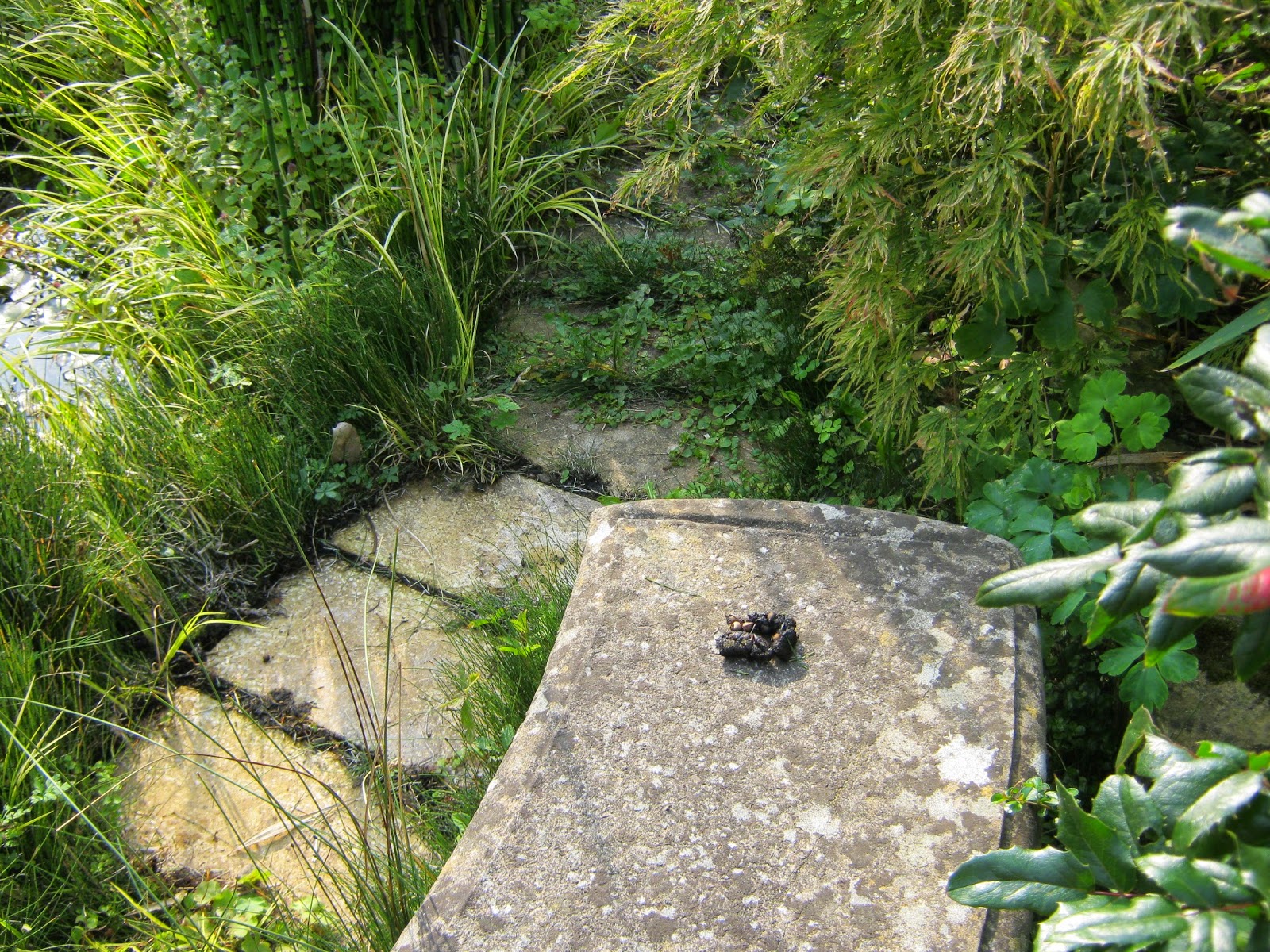 Here is the stone seat beside my pond. I've been sitting here quite frequently in the last couple of weeks, trying to assess how many of the new fish have escaped the attentions of the heron.
This morning I discover that someone else has been sitting, or at least crouching here too. And they have left me a clear message that this is their territory.

It is perilously easy to be anthropomorphic about animals, and I find myself particularly prone to do this about the fox or foxes who make free with my garden most evenings, nights and early mornings. I know they do this because I have borrowed a motion (ha) sensitive camera, and I've seen what they're up to. I also know because they have the odd fight and shouting match in the road outside my bedroom window, usually at about four o'clock in the morning.

I know foxes are not everyone's cup of tea, but I have a certain admiration of the ingenuity of the urban foxes who create a successful life in such proximity to people, especially when many of those people may be hostile to them.
This faecal message tells me I'm being watched. I wish I had been able to watch the creature who hopped up here in order to leave this message, and the several other similar messages I have received over the last couple of years.

A few years ago foxes in this area nearly died out because of a severe outbreak of mange, but they are back, strong, healthy and with what I have to interpret as a sense of humour. I recently watched a pair of youngsters, working their way round a neighbouring bungalow, bouncing up to have a look through each lighted window. The occupant had no idea she was being investigated.
It was probably the same pair of adolescents who played volleyball with my previously neatly-stacked plastic flower pots and left them scattered across the lawn.

But who was it who left the same faecal message on a pair of leather gardening gloves I had accidentally left out overnight - left out on another garden seat moreover? And  whose aim is so accurate that they almost got it down the hole in the lawn where the washing line goes?

I cannot help but take this personally, and to be pleased that I am never alone in my garden.
Posted by Relatively Retiring at 11:44 13 comments: 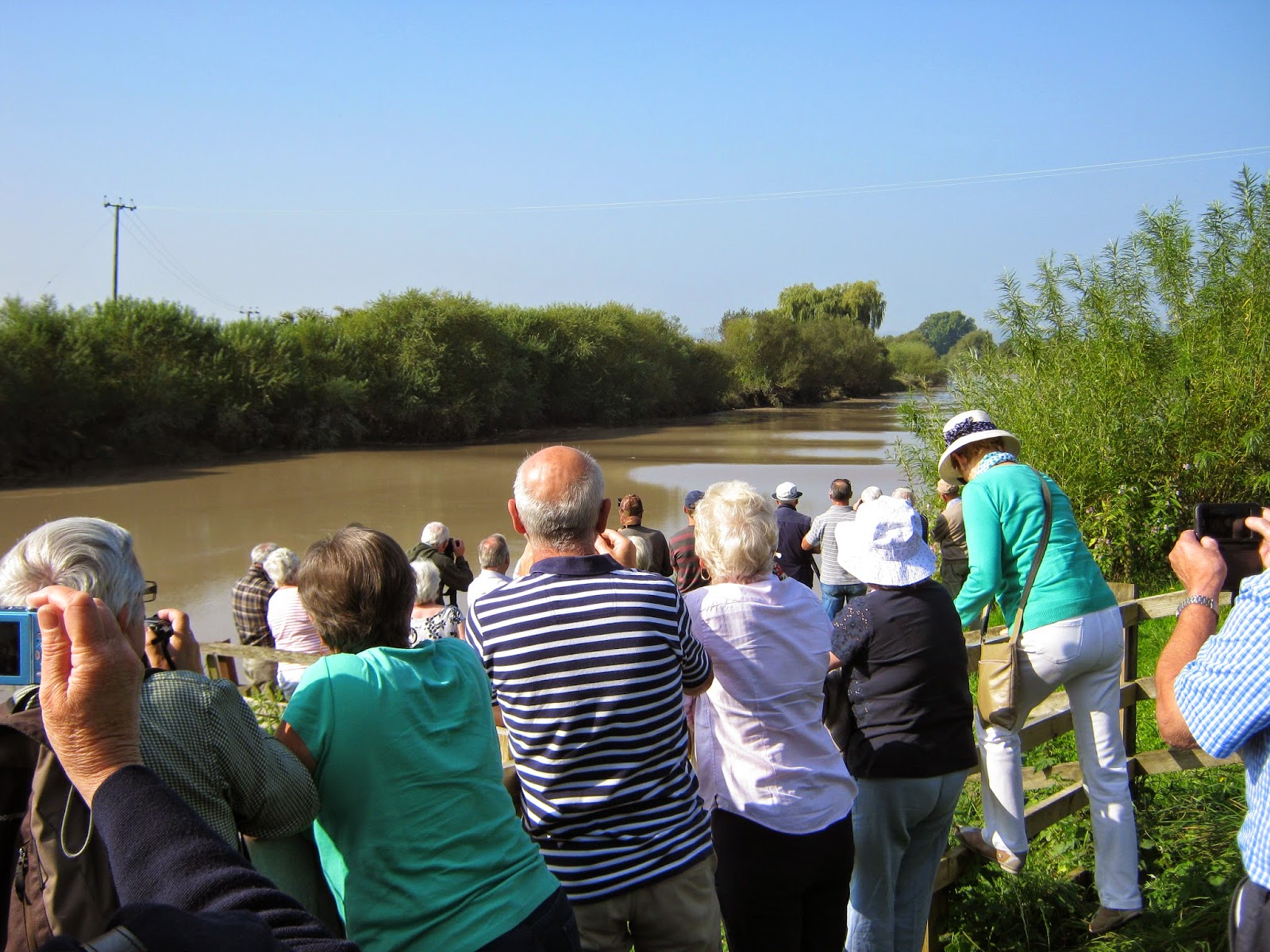 Yesterday, another of these lovely warm misty September mornings, a friend, her eighteen month old daughter Molly and I went to see this.
Not with wet-suits and surf boards though.
Just with some drinks, a copious picnic for Molly and a folding chair for me.

We went downstream from where we live to the pretty village of Minsterworth, where the River Severn has to push its way through a comparatively narrow channel on its route to the sea.
For this is the secret of boring success, the narrowing of a channel, so that incoming sea and outflowing river meet in conflict. As the tide rises sea trumps river and suddenly the river is forced backwards, upstream, fighting and churning all the way until the tide relents, sinks and allows the flow to reverse again.

A natural phenomenon which occurs twice a day, and sometimes the effect is barely perceptible. Then occasionally a combination of factors; wind direction, low air-pressure,  high level of water in the river, high tides and always, always the pull of the moon build together to make the effect spectacular, to make the primary wave dramatic and its after-effects memorable. Then determined characters rush out with their surfboards, canoes and even micro-light aircraft to follow the wave at about 8 to 12 miles per hour as it roars and weaves along the river's path through green fields.

A pleasant saunter on a surfboard you might think, but not when you see what is just behind the primary wave, for there is a churning, racing maelstrom of dark opaque water, punctuated by random whirlpools and conflicting currents. There are huge gyrating tree trunks, swirling logs and random detritus bobbing and cavorting in an unpredictable dance as fresh and sea water continue their wrestling match along the river bed.

After nearly an hour the flow of water slows, and the clots of foam from riverside manufacturing begin, very slowly, to sink. The sea water feels the pull as the tide begins to turn, and after a brief period of tranquillity the whole process is reversed. River trumps sea, and the invading salt water is pushed back.

So Molly concluded her picnic, parishioners at the nearby church stopped serving bacon butties and coffee, the cameras were packed away and we leave the mighty Severn with its third highest tidal range in the world (in the WORLD - our local river) to push all that salt water and old wood back out to the open sea.

Not boring at all.
Posted by Relatively Retiring at 15:43 12 comments: