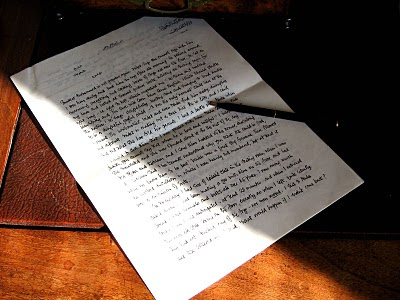 Here's a response to 'PohanginaPete',whose wonderfully diverse photographic blog appears almost daily. I'm proud of the fact that he's my nephew, and that we share a sort of addiction to writing.

It is an addiction, in my case. Throughout most of my life I have kept journals and diaries, and their purpose has been to clarify my thoughts. I have never intended them to be read by anyone else, and, for that reason, many have been consigned to the bonfire.

Seeing one's thoughts go up in flames has been a truly cathartic experience.
After the traumatic year of my husband's death I wrote pages of grief, anger, misery and self-indulgence. There is no longer a place for those feelings in my life, although there was a burning need to express them at the time. Burning was the right word, and the right end for them.

The pages above are from one of my journals of 1968, when I was working in Saudi Arabia.
They have been lost in the depths of the attic for forty years, and when they emerged during a down-sizing clear-out I was amazed. Did I really go there, do that, think that? I must have been a more adventurous and interesting person that I could ever acknowledge.
I liked myself better, because of these faded pages.

Throughout the first years of their infancy I kept daily diaries for my sons, trying to record not so much of my own feelings (which were totally overwhelming at times) but their own developing skills and actions. If blogging was possible then I would have used it for them. The nearest thing I've seen to it is the record being built here, 'Bud of a Bud' which will give a little girl the loving details of her first years.

Many years on and some of my writing comes back again in unexpected ways. The rediscovery of ancient journals has lead to the rediscovery of ancient friendships, and their development into new joys.
It is possible, with some very slightly judicious editing, to give back to my sons an interpretation of the day-to-day living of their first few years; at times hilarious, at times very touching, at times demanding and exhausting, but feeling real and as honest as I could be.

The words go from the brain, into the hand, through the pen, on to the paper.
When I pick up the pen I seldom have a clear knowledge of what it will produce.
Sometimes the words stay there, in the Moleskine notebook, in the smaller notebook in the kitchen, the smaller-still one in the handbag.

Many of them go deeper and wider and end up in different form.
The journals of '68/'69 became published work which led to a second career in writing, but I actually had my first writing published when I was six years old.

Truly addictive.
As essential as breathing.
Posted by Relatively Retiring at 08:41 22 comments: 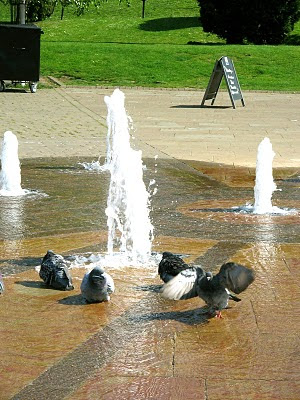 Isn't it great to DO things with friends?

Instead of the usual fighting over discarded food, stalking and molesting each other, and picking on the weak and maimed, these pigeons were enjoying a spa experience in the city-centre, riverside fountains this morning.
In warm sunshine.
Bathing their contaminated little feet, enjoying the cool spray on their manky old feathers.
Looking better, feeling better.

A sense of calm purpose enveloped them.
Later in the day they won't be able to get near the fountains. The toddlers will be there (also bathing their little feet, but we'll pass over that thought). But in the early morning sun the place was theirs, and they had come together in a crowd, aware of each other, offering protection in numbers, but each enjoying their own experience.

Elsewhere in this early morning, the same community spirit was strong. A great many senior citizens, equipped with Cool-Boxes and sun-hats were making their purposeful way over the bridge to the cricket ground. This is Worcester, I'm talking about, and it is clearly a Big Day.
The same sense of calm purpose was there, the same intent to enjoy the shared experience.

It is said that many of us have three types of community; family, work and other.
'Other' is what we chose to join in with, paddling in the fountain, watching cricket, learning French, playing golf, volunteering for a service.
Not all of us are fortunate enough to have these varieties of community, and many of us lose all or parts of them at different times. It happens, for instance, with retirement, bereavement and when the children leave home. Life gets out of balance, communities change and there is a sometimes difficult and painful period of readjustment.

We don't generally choose our work community (unless we own the whole set-up), and we don't choose our extended families. Blessed are they who find deep compatibility and harmony therein. Challenged are the rest of us.
However, we can chose the 'Other'.
It takes energy and discrimination, and, in my case, a fair bit of trial and error.
I'm working on it; the need for shared enjoyment and the appreciation of calm purpose.

This morning I watched the pigeons. Contaminated feet or not, they got it right today.
Posted by Relatively Retiring at 13:18 9 comments: