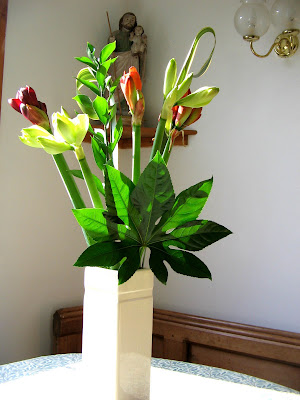 No one ever tells you how hard it is to be a mother, and if they tried you would probably not believe it.

The hardest part is the letting go, and I know that some of my blogging friends are experiencing this.

It's tough when they go to school, even to playgroup or nursery. You have known their every breath, every nose-wipe - and even more intimate details. Then, suddenly, they are in this grey uniform with laced-up leather shoes and a manly, knotted tie (which you have sewn on to a strip of elastic).
"What did you do today?"
"Nothing."
"Did you have a good time? Were you happy? Was everyone kind to you?"
"Yes, I suppose so."
"What do you mean, you suppose so? Did anything bad happen? Is there any sort of problem? You must tell me straight away..."
"I need food!"

Another few moments pass:
"You can't go to university until you can iron a shirt."
"Mum, no one, but no one wears shirts these days. And if they do they never, ever iron them."

And then, quite soon:
"Mum, if you need help with the gardening you only have to say. I will even pay for someone to come and remove cobwebs if you need help."
"Thank you, but I like cobwebs. This is an ecologically balanced house."
"Now don't be difficult, Mum."

The bouquet arrived today, from both my sons, and in the background is the statue their father regarded as a guardian of our home: St. Joseph, who had the toughest parenting role of all.
I don't see much of my sons, these days. They are busy. They have Significant Others in their lives. Mothering is on the shelf, with St. Joseph, but it's always there, quietly in the background now.

I tread a delicate tightrope between expressions of love and care, the balance of independence and support.
When you set people completely free there is a risk that they may not realise just how much you care. Giving this freedom is probably the hardest part of love, the hardest part of parenting. 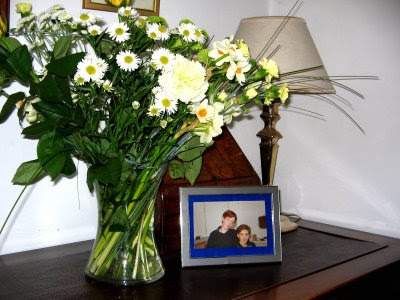 And this one came later....From Russia, With Love!
Posted by Relatively Retiring at 15:59 23 comments: It's been a long, hard, dark, cold winter here in Middle England. It's felt sterile and unproductive, with frozen ground and frozen air, and the sort of North winds that cut through all the layers of clothing.
Suddenly, last weekend, there was power in the sunlight. I sat in the summer-house, although it was hardly summer. The sap was visibly rising, the vine dripping where it had been pruned last autumn; daffodils, snowdrops, crocus, pulmonaria, hellebore stretching out to greet the warmth. Just as the dog and I were doing.
I needed to get soil beneath my finger-nails again, and so did the dog. She began digging, too, in her secret location behind the dustbin. Knowing it to be illicit, or at least generally disapproved of, she was at it furtively, with many backward glances in my direction.

I could be more positive. I got out the mower and cut the grass. Then I became thoroughly motivated. Grass cuttings! My compost heap could grow again.
One thing that stirs deep passions in my admittedly matronly bosom is my compost heap. Well, both compost heaps, for one is a work in progress, maturing, while the other is being built.

A glance at the contents of my compost-in-progress will show you that hardly anything is wasted in this small plot. All the vegetable parings, garden refuse, dead house-plants and floral arrangements are chopped and added, and now they can be layered with grass-cuttings. Within a few months they will be reduced and reformed to the consistency of something more appetising and much healthier than chocolate fudge cake. This rich, dark, crumbly goodness is then fed back. The bamboos will be enjoying the remains of my birthday bouquet, the day-lilies will thrive on vegetable peel.

To anyone who doesn't garden it is really hard to convey this sort of passion. To anyone who does...well, it's familiar territory.
The satisfaction to be gained from recycling the unwanted into something valuable is immense, and seems to grow with age.

In widowhood I have had to learn to garden in a different way. I have had to find ways of doing heavy tasks, like compost-turning, branch-cutting, heavy pruning, patio-grouting. The secret seems to be to take it slowly; to break really hard tasks into smaller units, and to know when to stop, which is at the point when the pain begins, rather than wait until it becomes really bad.

This now seems to be a good way to approach life in older age; to recognise the limits and to accept them, while at the same time trying to find a way around them. It encourages lateral thinking skills.
Slow maturing, just like the compost heap.
Posted by Relatively Retiring at 16:49 13 comments: