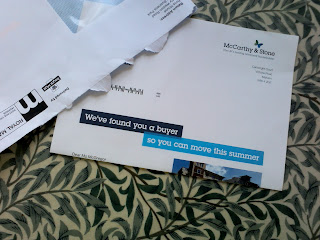 Here I go again.....the equivalent of last week's door-to-door pressure selling. Now someone has found me a buyer so I can move house. Well, not really move house, but move into one of their so-called Assisted Living Apartments.
Extremely thoughtful of them, but the sale presents a few problems, the main one being that my house is not on the market and their hopeful purchaser is going to be disappointed. They might have asked me before they found this buyer, but I guess that someone, somewhere found my date of birth and decided  that at the age of 75 I must be past making any sort of rational decision.
This potential sale offers me a worry and hassle free time with no estate agent fees, no removal fees, free valuations, a guaranteed price and a contribution (unspecified) to solicitor fees. You bet!
I wouldn't need removal fees because I'd have to sell the furniture. None of my Victorian family clobber is going to fit into the tiny retirement rooms. Free valuations? By whom? Presumably by the same agency that gives the guaranteed price. What on earth does it all mean? (Don't tell me, I think I know.)

But it also claims that I can start enjoying 'a more colourful assisted living retirement'. Now this might have its moments?

As with the countless helpful schemes involving computer repairs in exchange for bank details, Nigerian diplomats wanting somewhere to put their money and other too-good-to-be-true offers there must be people who respond to this sort of thing. There must be senior citizens who receive a letter like this and make a decision to downsize and move. Other retirement facilities in the area have been offering M&S vouchers to anyone who will go in and have a look round. Just look round, no pressure, no signatures needed? Enough vouchers to buy a new cardigan.
Similarly does anyone suddenly decide they really, really want a conservatory or double glazing because someone rings up and offers amazing prices in return for an instant decision? Well, they must do, or else people wouldn't keep trying it.

When I was in Madeira a couple of years ago I was puzzled by the boat trips which promised 'No Time-Shares'. Then I learned something of the degree of pressure applied by Time Share Salespersons to visitors when they were captives on a boat cruise.
What with the dish-cloths and the assisted living it's starting to feel a bit like it here.

To cool down I look a a photo my son sent yesterday: It's of the giant waterlily at Kew. 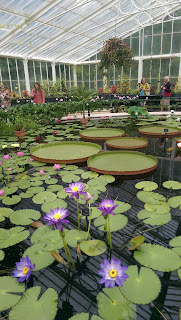 Then I remember how, as a very small child, I loved the photo of this in The Children's Encyclopaedia. There was a little girl sitting in the middle of a leaf.  Magical! My parents took me to see it in its real and humid flesh, and again I was filled with indignation at not being allowed to clamber into the pool and sit on Victoria Amazonica.
Nearly seventy years on.
Still indignant.
Still in Middle England.

Coffin-Dodging or Death by Elephant? 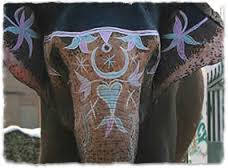 A young man has just been to the door. He had a battered sports bag filled with dish-cloths and tea-towels, a selection of which he expected me to buy. When I declined his offer his mood deteriorated rapidly (it's a hot day in Middle England) and he threw his wares back into the bag and stamped off down the path. As he reached the gate he turned back and called, 'Effing coffin-dodger!'
Who? Me?

I would have been interested to take him up on a few points. Effing and dodging coffins, for instance. Surely an oxymoron?
Dodging coffins? How? Are they being thrown about? Dodging them implies a level of physical activity and agility which I could actually see as being quite complimentary.
Does having white hair and declining to buy an over-priced dish-cloth imply that you should be in a coffin?
I would have liked to explain a few points and find out how he justifies this sort of approach to potential customers.

Avoiding a coffin? Yes. I already have this one organised, I hope. I wrote about it here some years ago, and the forms have been registered.  But it is necessary to die neatly and and the right sort of time for this one. Not during weekends and Bank Holidays, for example, when the relevant University office is closed, and not with too many bits missing.

In the time it took me to get back into the garden my thought processes had cantered on, and I was thinking about people taken totally by surprise when they thought themselves invincible, and when there was no insurance either. A number of Burmese Kings in the 15th and 16th centuries, for instance. I've been reading about them.
King Tabinshwheti had heard about a most auspicious white elephant and went off on a three month campaign with some of his staff to find it. On his 34th birthday he was decapitated by some of the staff in the general confusion about the elephant, although there were a great many other political issues going on at the same time. The elephant remained elusive. Can this be the origin of a White Elephant stall at the jumble sale?

King Razadarit went out to lasso an elephant, but lassoed himself instead and died, strangled by his badly thrown rope.
Crown Prince Minrekyawswa died when his own War Elephant was wounded and rolled over, crushing the Prince in his howda, while King Uzana was trampled to death by an enraged elephant.

Who would have thought it? All those active, rich, powerful young people being mashed by elephants, or while looking for elephants.
No matter how well-protected and agile you are you can't avoid the ultimate end.
But I think you can dodge a coffin.
The young man was right.
Bless him!
Posted by Relatively Retiring at 16:30 11 comments: 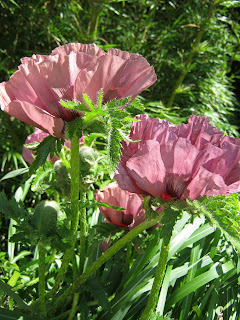 ...........I get going here.
Here in my garden with Patty's Plum, one of the most dramatic of big Oriental poppies..... and with Allium Christophii (below, right). This sort of planting makes me realise I can be something of a drama queen in the privacy of my own garden, but Christophii has decided to spread itself around the place, as have the equally big Alliums, Purple Sensation. 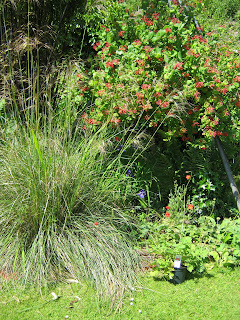 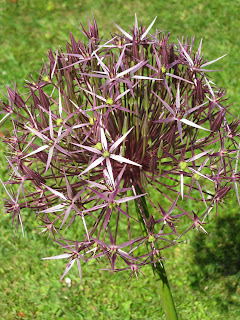 So has this bright red honeysuckle, rescued as a dry twig many years ago and now weaving itself all through the frame of the big swing, so that visiting sons can barely manage their chin-ups.

Many plants do their own thing in my garden. I put them in the ground and stand back. Things that are difficult to grow sometimes escape from where they have been carefully planted and appear somewhere else, somewhere that is meant to be inappropriate, but they have decided otherwise.
Some things just appear all by themselves, like the great big pineapple lily eucomis that came to live under the kitchen window. I have no idea how it got there, but it's very happy by the drain and puts up more flowers every year. 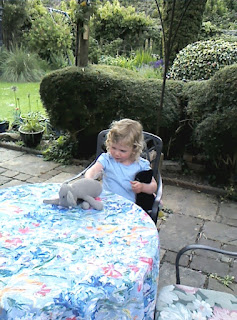 Granddaughter waits for afternoon tea, and she had (mostly) made the shortbread.

I am grateful to the kind people who expressed concern over my lack of blog postings. I hit a bad patch, as we all do, and so went to ground for a while.
Thank you.
I am very appreciative of the concern.
Posted by Relatively Retiring at 12:45 8 comments: