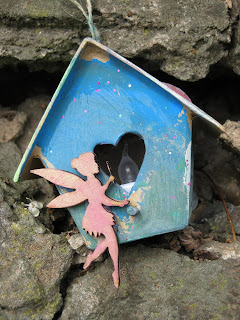 A busy weekend in my garden, so much more activity than I appreciated because it's going on all the time apparently,  right under my insensitive nose.
A happy, hot family weekend with Granddaughter E who, unbelievably, will be starting school in September, and little brother who equally unbelievably will be one year old at the same time. And their parents. Of course, their parents, looking tanned and happy but a bit jaded, hoping for lots of home-cooking ('Five puddings on Sunday. Only five!') and a bit of a respite.
Where has this year gone?

The garden has been such a success for everyone, especially in the warmth. So much so that the fairies have moved in on a large scale, except that I'm told they have always been here, it's just that I'm not a fairy expert, unlike E. who clearly is.

My sons were not experts in their childhood, either. They noticed lots of things, insects, stones, sticks, mud, stinging nettles, poisonous potentials,  amphibians, but not fairies.  They were never aware a single one, not a gnome, nor a pixie.
I wonder if Grandson will be an expert, and how much his big sister will influence him. At the moment he's concentrating on standing, jigging, crawling, eating and mostly smiling and laughing with the odd burst of singing and chatting (he's in a choir, after all).

Granddaughter knows all about fairies, their haunts and habitats and habits, and they have been fairly demanding this weekend. She has had to keep them supplied with tiny meals of specially dainty and flavoursome items. They like the several special herbs in the garden, notably the fruit-flavoured sages and mints. When they don't have anyone to wait on them they have to go and pick them for themselves, which is why E. explained they were tired and needed a rest from foraging, so Granny could do it for them.
In return they play music at night, and they leave small post-it notes around the place. Sometimes the writing looks like mine, but it's a lot smaller. I have to be careful not to tread on them in the garden. It's perilously easy and sometimes almost tempting to do so, but during the weekdays they have to go to school in the Hedgehog House at the bottom of the garden. (Sadly lacking hedgehogs for years now - but I digress). So we all have to be understanding. They will be working hard in school, and need to be well looked after at weekends.

Oh, what lovely not-so-subtle messages come through. Luckily the fairies will love going to school, they will love their new uniforms, they are going to be with their friends. It's just that they need to make sure that everything is going to be just right at home as well, that the attention and care is unchanged, that everything is safe and happy. That if they need tiny delicate meals someone will provide them as quickly as possible. Or even large meals with extra cheese, come to that.

Darth Vader is another matter. He is likely to be in the lavatory upstairs, which makes it difficult for a rising 5 year old to go up there on her own, especially along the long corridor in this house. A Granny  waiting at the bottom step will do as protection, but it needs that extra adult vigilance. Darth Vader might even have his light-shaver up there. We are all very sure that he wouldn't dare to go into a school though.

How good it is when we can recognise our own Darth Vaders and talk about them and find the right levels of protection and support. We all have them in there somewhere, just as we have good and happy influences flitting around, playing beautiful music that no one else can hear.

Posted by Relatively Retiring at 13:38 9 comments: