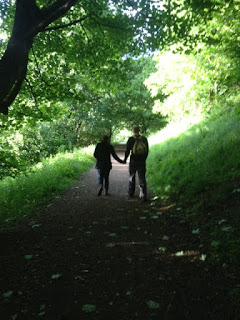 In the evening the sun came out, and my younger son, on the first of his Fathers' Days, was able to go for a walk with his wife, while his brother took photographs and his mother did the washing-up and baby-sitting duties.
Prior to that he had changed a couple of uncomfortably full nappies, spooned an assortment of foods into his small daughter and had a quick nap in the middle of the lawn, even though it was cool and starting to rain.
He had a bad night, a very early morning, and a number of joyful, laughter-filled hours in which small daughter trampled on him, played the keyboard with him, chewed whatever he was trying to read, patted his head, swung on his hands and broke into rapturous smiles whenever their eyes met.
A day pretty much like many others, in fact.

Fathers' Days are not that old.
I never experienced them in my own childhood, but a couple of decades back my sons spent a school afternoon producing heavily decorated cards, and were also persuaded to part with pocket-money on chocolate bars.
('Do you think he'll share it?'
'Oh, I'm sure he will.'
'Perhaps I'll put a note on it to remind him.')

This year my older son visited the place where his father's ashes are buried, and at dinner-time both of them fondly remembered their intense dislike of his morning cheerfulness, bursting into their bedrooms singing, 'Morning has Broken', but at the same time bringing them cups of tea.
I hadn't realised about the tea. In my own jaundiced early morning state I could not have trusted myself not to tip it into their tousled beds.
The early morning cheerfulness seemed like a trial for all of us.

I have tended to feel cynical about the commercialisation of these 'special' days, seeing them as opportunism yet again, but  yesterday was special, with so many confused memories of my own father as well, and my feeling of regret that I knew so little of him as a person because his interests and enthusiasms were always elsewhere.
But the celebration of the day felt right. There were memories of old fatherhood, with all its good and bad and confused bits, and there is the real joy of seeing new fatherhood, growing and strengthening with every soggy nappy, early-morning wake-up call and radiant recognition by a happy little daughter.

And now the early-morning cheerfulness is back - fresh, irresistible and so very welcome!

Posted by Relatively Retiring at 19:00 15 comments: 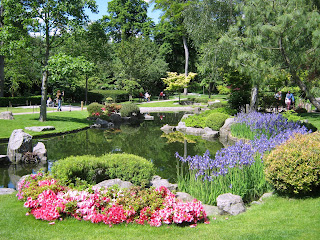 
Two days in London, and hardly a shop in sight (well, only for basic foodstuffs).
Two days of wonderful greenery, magnificent gardens, a spectacular river trip, and a brief skirmish with the paparazzi because we had forgotten that Her Majesty was due at Westminster at the same time as us.
This is parking in London at its very best. In glorious sunshine as well.

I was visiting my son, who lives very near to Hyde Park, one of the many Royal Parks in central London.
We walked, admiring wonderful trees and shrubs, through the park to Holland Park, which is not Royal, but might as well be by virtue of its surrounding wealth. It's in the Royal Borough, anyway.
How enjoyable to be in a great city and to walk, by way of leafy lanes and exquisite small streets, from one magnificent open space to another.
How enjoyable to eat lunch out of doors in Holland Park while a rehearsal for the current opera is taking place a few feet away.
And then to wander along to the Kyoto Garden with its high waterfalls, rocks and traditional Japanese planting, a gift from the Kyoto Chamber of Commerce in 1991.
Admittedly the sunshine helps a lot.
As does the time of year.
As does the company.

The next day we moved up a notch in scale and went upstream, up the Thames to the Royal Botanic Gardens at Kew, inadvertently arriving at Westminster just ahead of Her Majesty and Entourage, but still managing to get through the crowds and to the boat at Westminster Pier. 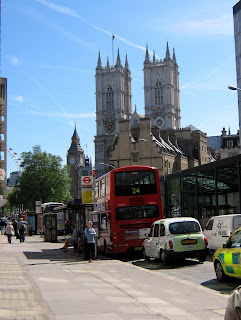 Here is the iconic view, just before we met the paparazzi: Westminster Abbey, the clock face of Big Ben, and, just to the left, the London Eye. And a big red bus.

London, sparkling in the sunshine, green and fresh and beautiful.
The Queen out for the morning too, and my son, knowing how to give his old Mum a good time. I hope Prince Charles can do as well, but I know he couldn't do better!

Posted by Relatively Retiring at 16:14 16 comments: