Pirates in the Kitchen (also Mermaids). 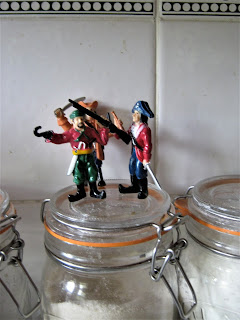 (A bedtime story for grandchildren who are now three, about to be seven, and  getting ready to be born next year.)

Far away where the mermaids sing the pirates sailed their raft. It was made of clear glass, and it was round.
The pirates, three of them, shouted a lot and waved their weapons about and pushed each other and nearly fell off their little glass raft. They made a great deal of noise and fuss.
And deeper under the raft the mermaids saw an awful lot of agitation and heaving about and wafted themselves over to see what was happening. Mermaids swim slowly, wafting their tails up and down. They are not built for speed, like a shark, and they usually carry their hairdressing stuff and a small mirror so that they can be sure they are looking lovely all the time.

When they (there were seven of them) got near to the churning whiteness and heard all the shouting  they said, 'Oh dear. Pirates again!' and they flopped themselves up on to the glass raft. They took out their combs and brushes and little mirrors from their vanity cases and sat there, combing their hair.

The pirates were shocked into silence, mostly because their raft was tilting heavily to one side, with all the mermaids sitting there.
Ivo, the pirate with the silver sword  cleared his throat.
"Ahem, ladies," he said. "Would you mind spreading out a bit? You're making our raft tilt, and we don't want to fall off ."
"Can't you swim?" said one mermaid. She had long fair hair, just as mermaids should.
"That's not important," Ivo said, and all the mermaids laughed. All seven of them.
"Not important?" said the  blonde mermaid. "Not important?  Not important? Are you mad? Fooling about on a little glass raft, pushing each other, shouting and fighting - and you can't swim?"
And all the mermaids combed their hair and tossed it about and laughed and laughed.

Now there's something that pirates really don't like, and that is being laughed at. Mermaids don't like it either. Well, no one does really.
"Swimming is not important," said Ivo. "What is important is not falling off the raft, because if you fall off....."
But he didn't have the chance to finish, because all the mermaids hooted with laughter and shouted, "You'll drown, you'll drown! The fish will eat you!"
"How can you drown on the kitchen work-top?" said Ivo, and this time all the pirates hooted and laughed. Peg-Leg the politically incorrect pirate laughed so much he lost his balance, fell off the raft and slid down the back of the storage jar on the kitchen work-top.
The mermaids.put down their combs and mirrors and looked around.
"Oh!" they said, all of them. "Oh, oh and oh! We didn't see this one coming!"
"It's ok" shouted Peg-Leg from behind the storage jar. "We're all going to a birthday tea. Two birthday teas actually. One for pirates, one for mermaids. It'll be fine."

Just then Granny came into the kitchen. "I'm sure I had three pirates for the top of the cake", she said. "Who's messing about now?"

And early next year there will be another birthday, a day of birth, and the eaters of this year's birthday cakes will have a new little cousin to join the celebrations, someone to teach about dinosaurs and stars and beetles, never mind pirates and mermaids.
Such a lot to look forward to, for all of us.

Posted by Relatively Retiring at 12:33

Sweet story. Congratulations on the coming event. A new grandchild will be coming into my life next year also.

Starting over: thank you for your comment. It sounds like a good New Year for both of us. I hope all goes well for you and yours.
I'm frequently asked for spontaneous stories about many household items, so this one is ready for the next visit.

A lovely, lovely story, and a lovely and heart-warming time.

Oh, the wonderful silliness of it all. I hope the dinosaurs have feathers, in the continuation of the story.

E.C. and Zhoen: thank you for reading and commenting. Being able to make children laugh (and some adults) is one of the joys of old age. My granddaughter tries to keep me in check. While I was singing one of my favourite songs -'I'm a Pink Toothbrush. You're a Blue Toothbrush' she said, 'You can be very silly, for a Granny,' but then added, 'Being silly is fun'. My granson just said, 'Do it again, Granny'
What a great audience!


Lovely mermaid story. I would like to be one of those pirates/mermaids and have you for a granny....

Molly: thank you for your kind comment. I'm about the embark on making a mermaid costume for the next birthday. Let me know your measurements and I'll see what I can do?

Congratulations and how very exciting about the new arrival ! As you say, so much to look forward to!
One of the great things about having children around is finding little figures left all over the house, seemingly doing surreal things. How clever to make up a story! So, Mermaids are in favour right now - a mermaid costume would be wonderful and fun to make if you have the skill. I still remember a butterfly costume made by my great-grandmother - of different sorts of net with a beaded bodice. My mother wore it before I did, but sadly it was burned in a fire when I was 11. I have a photo of it but how I wish I could remember all the colours. I remember the feeling of it quite distinctly.

Jenny, thank you for your comment. It's interesting that I too have vivid memories of the textures of clothing worn in my early childhood, perhaps because it was war time and clothes were invariably cast-offs and often uncomfortable. I would have loved a butterfly outfit.
Mermaids and unicorns seem to be the flavour of the month with granddaughter and friends, and as for grandson, well, it's wonderful how much joy three plastic pirates on top of a chocolate cake can create. Very gratifying for the cook!

You have a spam.

Ah, that's lovely! And congratulations on the imminent new arrival.

The functionality of 2FA is not working in proper way

Is your Binance Two-factor authentication not working in a proper way? If you are dealing with errors that are creating troubles which are mentioned already, then you are advised to take help from the team of skilled professionals. To get in touch with the team, users can always take assistance from them who are there to support you. You can call on Binance customer support number which is all the time active and users can talk to them all the time for availing quality results. Whenever you are in doubt, contact the team anytime for the fast results.
Website: https://www.cryptophonesupport.com/exchange/binance/

When you first start out, keep things simple as you invest. The possible gains made by diversifying and using a complex plan may sound enticing, but it is advisable to stick with a simple plan to start until you are comfortable. Over the long term, you will save money.

As you know, there are many sites and each one has its own characteristic or style. Use each style to your advantage and make your online presence known.
satta king
play bazaar

This isn't true in a vast amount of cancer cases! Studies show that people who face their disease with a positive attitude and who visualize the tumors dying, have a much better rate of survival!
satta king
play bazaar

One common mistake is to be more concerned with the speed of your workout than the techniques you use. No matter what type of exercise you are focussing on, keep your reps slower and concentrate on technique. You will find that you get much better results than if you speed through your routine. Slow down and double check that you're doing the exercise properly.
satta king
play bazaar