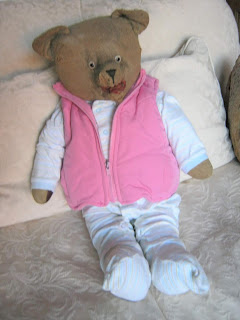 This is Janet. She and I slept together for many years, until I was about seven, I think. Before that I believe she slept with my father, and possibly she was a boy at that time. A boy called Ted.
She's been around a bit, has Janet, and she's looking distinctly the worse for wear. That's why she's fully dressed. I'm afraid that if her clothes came off quite a bit of her body would come off as well.
She must be knocking on more than a century.

But, undeterred by minor difficulties Janet came with me to visit Granddaughter's class who are investigating old toys and reading The Velveteen Rabbit.
I also took along Louise, who is even older. She is beautiful when clothed  (in silk vest, flannel petticoat, embroidered petticoat, embroidered dress, flannel coat, woollen cape and very pretty bonnet which luckily hides her real hair because someone, possibly my grandmother, chopped it short many, many decades ago).
But when her clothes are off Louise is not a pretty sight. She has a hard pink composition body . From it dangle fully articulated limbs, suspended by strings. The contrast with her beautiful porcelain face is somewhat stark.

Even older were two other small toys, a mounted cavalry man and a penguin with a suitcase, both made of lead. I also took several teddy bears the same age as me and, just to round things off, an articulated nightdress case in the form of a dog.

Grandparents had been invited into school to talk about toys 'in the olden days'. My granddaughter is very proud of me because she tells me I'm the oldest granny anyone has got in the whole school (probably including the staff). So I'm proudly representing the good old days, when toys were passed down the generations or were hand-made; when toys were potentially dangerous, fragile and inflammable and plastic hadn't been invented.

My old teddy bears (including Janet) crunch when handled. Some children suggested that they were filled with Rice Krispies, but others thought they were too heavy for that and decided, rightly, that they had straw and wood shavings inside.
Metal toys they thought were dangerous because they could cut people. The idea that they could poison was shocking (and a bit exciting) so it was made very clear that there are no toys made of lead now, and those I showed them were not to be touched.
Louise was 'yuck' although a better word was agreed to be 'weird'. It was thought strange that all my old toys were variously hard, crunchy, stiff, heavy and prickly. There was nothing soft and cuddly.
As for nightdress or pyjama cases......well, who would think about folding their p.j.s to fit into a zipped mohair dog, just to keep the bedroom tidy?

Mohair, hair and skin generally, which features large on and in many pre-plastic toys is another thought which I didn't want to spend too much time on with six-year-olds.
Several of my old teddy bears are made of sheep skin, but luckily a bright little boy in the front row assured me and the rest of the class that it doesn't hurt the sheep in the least, so that's all right.

I didn't tell them about one of my earliest memories of a wonderful soft toy I found in about 1945 when a visitor came to see my mother. In the kitchen she left a most beautiful large, soft, furry toy rabbit. Magic! A toy such as I had never seen. or felt or imagined. It must be a gift for me.
While she and my mother were talking I took this superb toy upstairs, dressed it in a doll's dress and tucked it into my bed ready for night-time. But when I went up to bed my beautiful new cuddly toy had vanished. Such a mystery! My mother told me years later that it was actually a dead rabbit, ready to be prepared for the visitor's dinner.

Thus ended my only real experience of a cuddly toy at bed-time. But Janet stuck by me, almost literally.

Posted by Relatively Retiring at 16:15

Oh, the rabbit corpse toy! That is so morbidly funny.

Hard, crunchy toys and lead toxicity. The great stories of the oldest gran. "In my day, toys were terrible, and we were *thankful*!"

I still don't get the appeal of hard plastic babydolls with curly acrylic hair. I was given many, and they all just lost their clothes, wound up in the bottom of boxes. I had a TravelLodge bear for pjs, which makes a bit more sense as a cuddly travel bag.

I do love the sheepskin bears, though. Poppets, magical constructs.

How wonderful that your granddaughter was so proud to take you to her school to share the stories of the toys of your childhood.
The dead rabbit story though was the best.

Was Janet looking as traumatised as that before being displayed to a class of small children? I'm sure my expression would be similar after an event like that.

Or, maybe she's reflecting on the eventual fate of the other soft toy that mysteriously disappeared, and thinking how lucky she was to have avoided that ;-)

A wonderful story, as usual.

Zhoen: I remembered that I wrote the sheepskin posting for you a few years ago. I was relieved to be assured that losing its skin doesn't hurt a sheep one little bit.
I had intended to talk about the many things we did with bits of rope in the olden days, but then thought better of it!

Starting Over: Thank you for your kind comment. It's great when someone is so very proud of me for being old. Even better that she lost a front tooth during this episode. I was glad I was there for such a significant event. A great morning growing older together!

P.Pete: Janet's traumas are the result of hearing so many of my childhood confessions in bed at night - and goodness knows what she heard from my father.
Granddaughter met Janet for the first time just before this occasion and I heard her whispering, "Don't worry about Granny, I'LL look after you properly." So Janet totters and crackles her way into another century.

I was discussing woodwool stuffing with my old toy dog Bouncer a few days ago - he's 65 so getting on a bit and his fur has largely worn away. He's feeling a bit crunchy too. The repair shop programme on BBC recently dismembered several teddies and washed their coats before refilling, I don't think Bouncer was keen on that idea at all, he was afraid his mohair might shrink! Many of my early toys were hand me downs, including some lead ones I still treasure. I don't think I ever put those in my mouth, but they were well played with. Having much older siblings and cousins I landed up with Christmas annuals going back into the 1930's and some celluloid dolls too. Hope Janet enjoyed the trip.

Jee: I think that treatment for Bouncer sounds more like taxidermy that restoration. Bouncer is right - he could end up half his present size.
Your Christmas annuals are probably really valuable now.

It is important to remain flexible with respect to the price of a stock. A golden math basic rule that must be reviewed, is that if you pay more for a stock with respect to the earnings, generally the lower the return will be. Waiting a week or so for a stock that is unattractive at $50 to drop to a more reasonable $30 is a wiser decision. satta king

due to the novelty of social media, there are still many business owners who are unfamiliar with it or how to use it. satta king
play bazaar

Those who have had first hand experience with cancer will know better than anyone else what you are going through and they can offer support and share experiences to help you through.
satta king
play bazaar

At most, you need to complete between twenty-five and fifty reps for each body part, roughly two or three times a week to gain the most muscle mass. This is going to be very beneficial to serious lifters. If you strive to do more than this, you may be wasting your time because overdoing it can lessen the results that you see.
satta king
play bazaar

It is significant for the cleaner to utilize protected, affirmed synthetic substances and to clean the rug rapidly and effectively to decrease introduction. Satta King
Play Bazaar