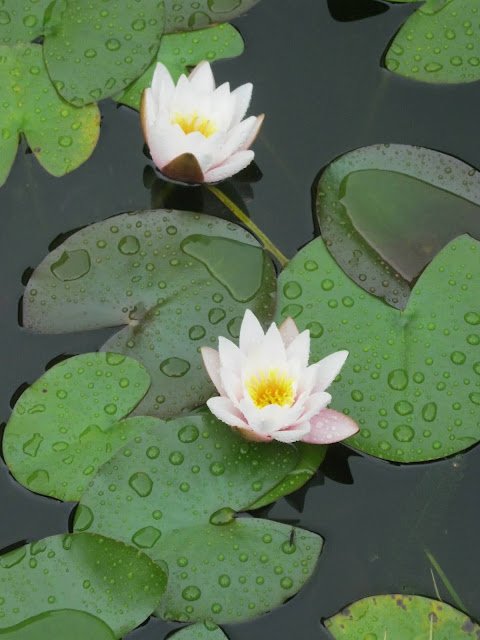 Rain drips steadily in the garden, although sometimes it thumps down. I have been steadily dripping inside the house too, also coughing and feeling unwell and miserable and alone and wishing someone, anyone. could come and make me a cup of tea. But they can't. So I do it myself and not tea either, but one of those lemon-type drinks with various medications that help you feel a bit better. Eventually.

I haven't really ventured out of my rather rigid degree of isolation, and now I'm back in it because I realise that I might be infected and infectious. Then I also realise that any time any of us gets a common-or-garden cold we are going to think, 'This is it! The end is nigh! One of those dreadful things with prongs all over it got through the holes in the face mask even though I have never been closer than a metre to anyone since this whole business began, let alone for more than fifteen minutes.'

Coming out of lock-down is hard to do. Harder than going into it, because at least we all knew where we stood on that. I don't want to know how long it has been, but I can measure it by the age of my youngest grandson, and he is now a bit more than six months old. We have not been able to meet yet. In earlier times I was  sort-of joking about hoping to meet him before he starts school. That wasn't funny at the time, and now it's even less funny because it becomes a realistic situation.

There was a fragment of chance a week or so ago, but it evaporated rapidly because I got very cold feet about going through Heathrow and getting on a plane. The cold feet are not for my own sake, but out of a deep mistrust of almost any of the so-called safety conditions in this country. I am in the much-at-risk category, and my fear is of picking up infection during the journey and transporting it to members of the family who are otherwise safe and well in a country where rules are clear and (mostly) obeyed. In England they are neither.

This account is not strictly true, either. There have been two occasions when family members in this country have visited here for the day, and one recent occasion when I visited them and stayed overnight. All these visits were made after much thought and discussion, and with young children firmly in mind. We needed to see each other, and I had been self-isolated here for weeks on end so that I would not pose any risk to them.

As an accredited at-risk oldie I think it is my duty to be as well-informed as possible about the risk factors, and then to make the best decision I can in any situation. There are risks in close contact with young children who are at Nursery and playing with a variety of other friends, but what are the risks to them of not seeing their only grand-parent or, much worse, thinking their only grand-parent may not want to see them?

The only way to stay safe may be to stay in lock-down isolation, disinfect every scrap of food and wash your hands every time you touch anything. Being born is probably the most dangerous thing we ever do because the whole of life from then on is beset with perils, some much worse and more likely than others. Perhaps instead of wishing each other to 'take care' we should be saying 'take risks', small ones that we've thought about and balanced against the other odds, but risks all the same.

And then we should go out and dance in the puddles, socially-distanced and silent.

Posted by Relatively Retiring at 16:36

Dancing in the puddles sounds pretty damn good to me.
As does your commitment to safety.
And yes, coming out is so often a risky business (as generations of homosexuals could attest.
I hope that when it happens your emerging from the closet is safer than theirs.
I also hope (fervently) that your cold is just that. Unpleasant but not life threatening.

Good luck fighting off whatever sneakyass virus got through to you. Virtual hugs.

Oh Dear! You poor thing colds are horrid at any time but even worse when you feel poorly all on your own. Do get better soon. Hope that the lemon drink helped and that you have everything you need to take care of yourself alone at home? I think you put into words exactly what many of us are feeling - staying home alone is not good but daring to go out and mingle again is definitely even more scary. I fear we will all soon become hermits not wanting to go out further than is absolutely necessary and then scuttling back to our bunkers where we feel safe even if a bit sad and lonely. Hope to hear soon that you are feeling better and that dancing in the puddles has lifted your spirits too! Love and virtual hugs coming your way.

E.C.,Zhoen and Marigold: Thank you for such kind comments which have made me feel a great deal better. I was really just commenting on how life has changed, when ordinary symptoms of a cold become something triggering all sorts of alarm signals. I have chosen to self-isolate mostly because I would not dare to cough or sneeze in any sort of public situation.
It's miserable feeling rotten in isolation, but perilously easy to simply stay there.

Beautifully written and very perceptive; you put into words what so many of us are feeling. I hope you feel much better soon, the rain abates and you can enjoy your garden. It's quite a challenge to re-emerge after lockdown, isn't it? I still feel cautious and am subconsciously waiting for Round Two to appear.

Please set a date and time for puddle-dancing and we will join you virtually.

Jan: thank you - now there's a thought! Virtual puddle-dancing. However the sun has come out again and I have forced myself out and about even if there are risks. My venture out today, to a local garden centre with the usual shopping and restaurant facility, brought its reward. I saw what I'd been hoping to see - a very careful elderly gentleman taking a swig of his cappuccino while wearing his mask. It sums up this whole situation for me!

How I wish you could come to my garden and squash some slugs, something that I'm too squeamish to do. Urgh.

I think we have to take small risks, yes, maybe especially we older people, since we have the leisure to make them as small as possible and really, one has to live!

We too went to a garden centre today and visited the cafe. Excitement....

Pam: thank you for your comment. I used to be squeamish too, but it's one of the very many things you can't be when you live alone.

I hope that your bug has now left you. And yes, you are saying just what I have been thinking recently. About time speeding up, and finding oneself becoming rather scared to do ordinary things. And thinking that every tiny symptom might be a vanishingly unlikely chance that one has somehow got infected when taking exhaustive precautions!

Jenny: thank you for your comment and concern. I had a standard infection, but it made me fully realise why the testing services are over-loaded and people have to travel considerable distances for an appointment. But I'm sure this'world-beating' system will appear eventually.
Perhaps it's a really good job that time passes quickly?