Let there be Light! 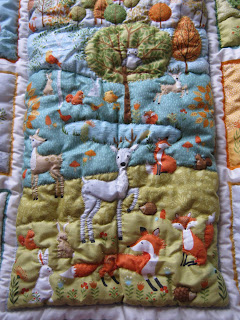 What a good job I finished this quilt for my new grandchild while I was still very, very short-sighted.
I used my shortsightedness to the maximum, sitting with the needle and thread almost touching my nose. It kept me occupied while I couldn't drive. I couldn't see in glare or low light levels, couldn't  see as far as my feet (I'm tall) so that I fell over quite a bit, couldn't see unless there was really sharp contrast, couldn't distinguish colours.
This had been happening slowly over a long time, so I didn't realise how bad my sight had become until a few months ago when it suddenly deteriorated a great deal, leaving me in the gloom of an English winter.
Cataracts, slowly creeping and clouding both eyes, cutting out the light, distorting the vision.
But so insidiously.

Three days ago I had the first surgery on my worst eye. My optician referred me to a new Eye Hospital in Birmingham - this one . It does work for both the National Health Service and private patients, and there are several SpaMedica hospitals in the UK.
I was very squeamish about anything to do with eyes, especially my own. I couldn't talk about what was happening, what was likely to happen. I couldn't even think about it.
Please note the past tense

Had I been referred to a local hospital there would have been several months to wait for the assessment, and a great deal longer to wait for surgery, by which time I think I would have had little sight left. SpaMedica gave me appointments for an assessment in three weeks, and surgery six weeks after that.
Everything was explained so clearly and carefully, the web-site and booklets they produce were so informative, the people I met during assessment so friendly and positive that I was no longer gibbering about eye-balls
I came home and finished the quilt in semi-darkness. I fell over again in the garden, and tripped on an invisible obstruction on a busy pavement. The car was immobilised and my son came and took it for a ride the top up the battery. I told people what was happening and was able to describe the surgery to interested Granddaughter. The time went quickly.

Just three days ago I returned to SpaMedica. I was there for about four hours, much of the time being taken up with eye-drops. Then I had surgery which lasted fifteen minutes .I felt a very small amount of pressure, but  nothing more than that. I saw bright light and a bit of swirling colour from under the plastic shroud over my face. Then I had a cup of tea and was brought back home with a party bag of eye-drops and sterile gauze.

Next morning my vision was blurred. By the next day it was blurred but brighter. On the third day.....WOW! My bedroom walls are bluish-white, not the sort of yellowish-beige I've lived with for a while. I had no idea my dressing gown was that colour. I could see the floor. I could see birds in the trees, neighbours in their gardens.
Outside I could see where the pavement ended and the road began - always a useful thing to know, but something that had eluded me in recent weeks. I could read car number plates.
I walked to the optician and had one lens removed from my spectacles. I have to keep the other lens for the untreated sepia eye. I booked my post-op examination, and I'm hoping for referral for the second eye as soon as possible.

Years ago patients were immobilised after cataract surgery, their heads fixed by sand-bags for weeks.
Today this procedure is one of the miracles of modern surgery, changing lives, restoring dignity and independence to those who could so easily lose it.
My most grateful thanks to all those involved in this process.

And I'm just waiting for someone to go under the quilt now.
Posted by Relatively Retiring at 15:06

WONDERFUL news.
I have heard nothing but good things about cataract surgery.
And I love your short-sighted quilt.
Monet's vision was compromised too. I wonder from time to time how much his cataracts affected his painting. And am so grateful he continued.

It's lovely that your fear was turned into enthusiasm and that the whole experience eas such a positive one! But best of all, how lovely to see colours again not to mention tripping hazzards on sidewalks. Very happy for you! And that wuilt is sure to be well loved....

Proof that one should not rush to the publish button.

That's really good news RR. Well done for taking the plunge. Eyesight is so precious if only for the safety reasons that your almost-tumble demonstrates.

I'm full of admiration too for the quilt :-).

E.C, Molly and Anonymous mm: many thanks for your comments. Cataract surgery does so much more than restore vision.
Interesting point about Monet, E.C. Now that I can see how much cataracts can change the perception of colour I wonder how Monet coped at all. My own vision was (and still is in the untreated eye) obscured by a yellowish haze. Not exactly unpleasant as it could seem as if you're wearing amber-tinted specs, but certainly affecting perception of all colours.


I found I couldn't do eyes, not (as I expected) due to squeamishness, but because of the laser strobe. Instant migraine, no matter what I did. Never did learn all the eyedrops protocols, wasn't there long enough. It's all very quick. And you do want the surgeons who've done thousands and thousands of them.

That's wonderful news, and I hope the other eye's as straightforward and effective.

The thought of losing my sight would terrify me. A younger friend with myopia almost identical to mine had her eyes lasered and said it was the best money she ever spent.

I was 60 when mine were done. My gosh, a different world I saw.
I was more or less put out for it, I wonder if that would work for the strobe affect on someone else's who mentioned it.
I hate that Zhoen can't see when it is possible with surgery.

Zhoen: thank you for commenting. I hope you understand why I've been out of blogging and commenting for a while. I'm sorry to know about the laser effect, especially if it could help you, as Gemma's Person says.
The surgeon who sorted me out does 25 cataract operations per working day. In our pre-surgery chat he asked how I was feeling. I said, "Terrified" and he said, "Good. I prefer it that way!" As I tottered off the table after 15 minutes I said, "Amazing!" and he said, "The surgery or just me?" I prefer it that way too ....instant laughter.

P.Pete: I looking forward to being able to read your blog now, and I hope you'll forgive my lack of comments.

Gemma's person: thank you for reading and commenting. I think Zhoen will read your comment to her, and it's easy to find her blog via mine.

Gemma, Sorry, I should have been clearer.

I meant as an OR nurse. I tried circulating on eye surgeries, and could not work in that specialty. If I needed it for myself, I'd do it, no question. So far, don't need it. I'm a little walleyed, but there is no good treatment for that.

I love that you were funny in the moment.

Pam: not just yet - only one eye done!

I shall wait with impatience for number 2 to be done!

your most logical option is to enlist an expert floor covering cleaning organization for expelling stains from your covering. Prior to utilizing this, test a little territory. Satta King
Play Bazaar