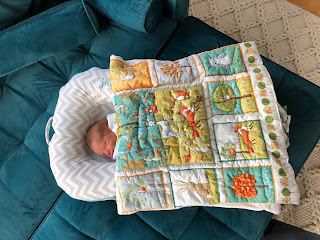 Here is my very new grandson; four days old, newly arrived home in Berlin and tucked up under the quilt. It seems to be working well, as is he. I like to think he's smiling, but my son doesn't think so, not just yet. Many other people are though, in several continents.

This little one is half Canadian, with a Canadian mother and a whole family of grand-parents, aunts, uncles and a  baby cousin in parts of Canada, including Alaska. He has a British family, an uncle, aunt and two cousins, plus a Granny who might turn out to be an Oma because he'll be mostly living in  Austria and will be bilingual. He has lots of relatives in New Zealand too because his father has dual nationality.
I am deeply grateful for Skype and e-mail, because he will be a widely travelling infant; a citizen of the world already. Apparently his passport is on its way.

A digression - what about those infant passports, issued before teeth emerge and valid for so many years? I remember airport officials being bemused by grand-daughter a couple of years ago, receiving a passport showing a glumly suspicious, wispy-haired baby and being confronted by an all-singing all-dancing little girl with a cascade of golden curls. Confusing for the authorities?

Three grand-children, how amazing. What a wonderful bonus in the life of an eighty year old.
Some time ago I almost arranged to have a tattoo reading (DNR - Do Not Resuscitate) in a conspicuous place. (Possibly also PTO on the reverse in case I was found the wrong way up). I didn't do that, but I did wear a bracelet with the same message when I was driving on my own. I had some medical issues and an absolute dread of being a nuisance to the family.

I don't wear it any more. I don't even know where it is.
I'd rather like to stick around a bit longer and see what happens next.
Thank you, grand-children for giving me a whole new reason for living.

Posted by Relatively Retiring at 14:27

Awww. I love the quilt too. One of your creations?
How lovely to have found a reason to keep going. Several vibrant reasons to keep going.

E.C: thank you. Yes, I managed to finish the quilt just before I had a cataract removed, and while I was still very short-sighted. I knew my vision would change dramatically - as has my outlook on life!

Having both cataracts done has improved Pirate's outlook too, actually and metaphorically!

So wonderful! A little citizen of the world.

gz: I agree. It does much more than restore vision. I'm hoping to have the second one done soon. Best wishes to Pirate.

Zhoen: that's right. Good to have a passport while you've still for a bit of umbilical cord.

mm: thank you, it's really lovely news and a very happy event. Such a good little chap - he even let them have a reasonable sleep one night.

I'm delighted, not just that I have another relative I hope to see (soon, if possible) but that you intend sticking around a bit longer (a lot longer, I hope). ��

Oh, so lovely. Yes, I too want to live, to see the grandchildren grow up. I'm seventy this year (a mere youth...) and the sixth and last grandbaby is due in October (if all goes well). So I need to aim for 90 at least. Here goes...

P.Pete: thank you. There's always Skype. Do you remember a session with Grand-daughter when she was calling you 'Peter Man' as opposed to 'Peter Rabbit'? The senior grandchildren would enjoy talking dinosaurs, fossils, unicorns and many other topics, and you might get some percussion with it.
As for me, I'm glad I didn't have the tattoo.

Pam: that's lovely news about another grandchild. I do hope all goes well for everyone.
Seventy is the new thirty.

Problems in depositing and withdrawing the funds

Getting involved in errors while using the Blockchain account for trading is quite normal. If you face any error while depositing and withdrawing the funds, you can always talk to the experts who are there to assist you. The team of skilled and elite professionals are always there to assist you. Call on Blockchain customer service number which is the easiest medium to get in touch with the skilled professionals who are there to guide you. Talk to them anytime for the best results that are useful and productive and can easily be executed without any obstructions.
Click for more info: https://www.psnblockchain.com/

Peruse the elements of your cleaning items, and don't neglect earth amicable cleaning techniques, such as utilizing salt, preparing pop and vinegar, or getting your floor covering through a wash to dispose of synthetic concoctions. Satta King
Play Bazaar

Awww that tiny, tiny little one under the warmth of your beautiful quilt. Happy to be growing old and feeling relevant and accomplished. It is fulfilment to have grand children. You have a lot more reasons to live long, take care of ourselves and be active. Though I don't recommend being a second parent to the grandchildren. What do you think?

Andrea: thank you for reading and commenting. No, I don't think I could cope with being a parent to little ones. One of the joys of being a grandparent is that you can rest when they've gone home!
What an interesting web-site you have.

Have you had your second eye done yet? Note from Pirate, keep up the eye drops!
That quilt is reminding me to get on with the work I started in NZ...as it's too miserable to go and garden!!

gz and Pirate; thank you for the reminder, Pirate, but I think there could be a long wait for the second eye. I am much better at reversing the car now - not easy with different eyes, is it?
I'm afraid it will be quite a time before I meet the little person under the quilt, too. He's a month old now and growing fast in Austria.

I seem to have loist you from my blogs I follow list so thank you or commenting on my post so I know you are still out there and can make sure you appear when you post in future.

Your family would be happy with the arrival of the baby. It is really a blessing to live with grandchildren. Hope you enjoy taking care of your grandson. The paintings and patterns of the quilt used is amazing. I learnt some of the basics of quilting from my friend in the Music class in Coimbatore.